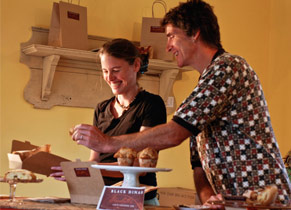 When Kate and Steve originally moved to Isle au Haut, it was into a cabin that held some rough charm in its tiny 12×12 footprint. It did not have running water, unless you counted the hose. While it was an adventure, and a foothold, it was not by any stretch of the imagination a permanent solution. Happily, an ICDC home became vacant, and, deciding that the island life was for them, Kate and Steve made the move. When Kate’s employers at the Keeper’s House decided to retire from innkeeping, Kate had to think quick, and it was fortunate that the house- which had been expanded for cottage industry in the past- would do for her dream. ICDC has since sold the house to the Shaffers, who have converted the barn into a commercial kitchen and fulfillment and shipping space for their ever-expanding business Black Dinah Chocolatiers and the related Café.

Due to the success of their business, they have moved their operations to the Portland area. We miss them and wish them continued success.