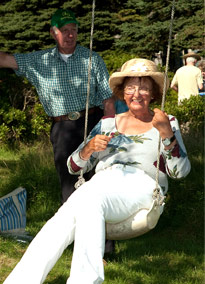 Having lived on Isle au Haut for their whole lives, if you have a question about the island, or want a good story, Billy and Bernie are the folks for you. The Barter family settled the island back in the late 1700s, and Billy, his son, and his grandsons still fish the waters around Isle au Haut: soon Billy will be helping to teach his great-grandsons the profession.

While Billy continues to fish from his boat and maintains his reputation as a joke teller, Bernie has long filled the role of being Bernadine. Boat greeter, fashionista, event planner, accordionist, dedicated volleyball player, long time member of both the school and church boards, as well as a participant in the Red Hat Society, and TAB soda devotee, Bernie is something of an icon on Isle au Haut.

Billy and Bernie have seen a lot of changes to the island over the years, as the population has periodically ebbed and swelled and the economy has evolved. What hasn’t changed, in their eyes, is the sense of community that people are who they are, so to speak, and that this is a place where neighbors will still pass the time of day together.