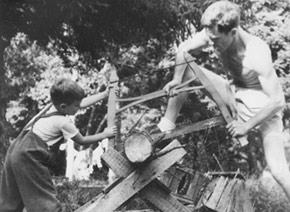 French explorer Samuel Champlain noted the island in 1604 and named it “Isle au Haut” (High Island), for the very good reason that it is the tallest island in Penobscot Bay.

Over the years, the pronunciation of “Isle au Haut” has drifted considerably. Nowadays, people who have spent time on the island pronounce it “i-la-HO.” In a similar vein, one of the inlets on Isle au Haut went from “Ciel Trappe” (Sky Trap) to Seal Trap- often leading people to erroneous conclusions.

The first European settler on Isle au Haut was Peletiah Barter, who arrived in 1792- three years after Isle au Haut had been incorporated as part Deer Isle Plantation. Over two centuries later, members spanning four generations of the Barter family continue to live and work on Isle au Haut.

Isle au Haut was incorporated as its own town on February 28th, 1874. Despite geographic proximity and vital transportation links, it is no longer even a part of the same county as Deer Isle.

There are at least 11 shipwrecks in the waters around Isle au Haut. None of them were mailboats.

During World War I, the town set a world record of 100 percent membership in the Red Cross.

The island gained electricity in 1970, and telephones in 1988. Cell phone reception is best on the Eastern side the of the island, but can occasionally be found on the town landing, and sometimes on a portion of the school’s front lawn.

The island’s edible resources are not limited to its waterways: wild strawberries, raspberries, blueberries, blackberries, cranberries and huckleberries all grow on Isle au Haut.

The islanders, in cahoots with the mailboat crew, host themed cook-offs at the town landing. Past themes include: Cheesecake, Spam, “Gourmet Gross-out,” and a competition where the required ingredient was the Maine state beverage, Moxie.

The winters drive you crazy/ And the fishin’s hard and slow/ You’re a damn fool if you stay/ But there’s no better place to go. — from the song “Hills of Isle au Haut” © 1970 Gordon Bok, BMI

Find out about the history of the island, location of cemeteries, and read oral histories at the Isle au Haut Historical Society.

In the summer, find out what events are happening – read posting at the Town Hall, Store or Town Landing or go to our Facebook  page, but now also check our calendar right here!